So the original plan was to go to a couple of bookstores around the city and put prints of this sketch in the pages of as many copies of "The Art of Urban Sketching" as I could find. (Not an original idea, as fans of the Post Secret blog & books do this too with their anonymous confessions.) It turns out though that none of the bookstores actually had any copies on the shelves, so no-go on that idea. Instead I went back to the alley in Columbia Heights where I drew the original sketch and found some spots to give them away or hide them for people to find. I found a couple of windshields to drop the envelopes.  Some that drove off before I got a picture of them,  of course not without a few funny looks as they picked up what I left for them.

When I felt like too many eyes where on me to put the last few envelopes on some windshields.  I found some bicycle baskets to drop them in.  A couple that also came and went before I got a picture off. 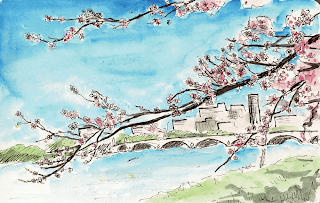 I went into the District today to see the cherry blossoms, which are blooming early this year due to the unusually warm weather. Most of the crowds go to the trees around the Tidal Basin, but there are also many cherries along the river in West Potomac Park, which is more peaceful. 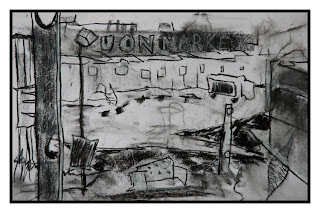 Took a walk today over a bridge
on New York Avenue you can hear and see it all.
Posted by Matthew Malone at 10:35 PM 0 comments

A tree in Rockcreek park near the dc park police station.
Posted by scorch at 1:06 PM 0 comments