This weekend marks the 50th anniversary of the March on Washington for Jobs and Freedom and Dr. King's "I Have a Dream" speech. Tens of thousands of people gathered on the National Mall near the Lincoln Memorial to commemorate the occasion, and to call for justice, as there is still more work to be done. Civil rights and labor groups from around the country marched along the original 1963 route to the Lincoln Memorial, and gathered to listen to speeches from civil rights leaders, including Martin Luther King III. There was also music and chanting in the streets. It was a powerful experience, and I'm glad I had the opportunity to march with them.

The Bikes of Washington, DC

Washington, DC has a very active - and at times - very strange cycling scene. Amongst one of the strangest sights you'll see is an interesting array of commuter bikes, which are found locked-up all over the sidewalks of the city. If you know your bikes, you'll see everything from standard-fare commuters to vintage race bikes such as Eddy Merckx, Bottechia, and even a rare Puch with Columbus SLX tubing. Indeed, the classic race bikes of the 80s don't die; they just get reincarnated as commuter bikes here in the nation's capital, and as a cycling aficionado/junkie, I like to sketch all sorts of these velo wonderments during my lunchtime strolls.

Here's a Raleigh Technium from the late-80s, featuring a bonded aluminum frame and first-generation Shimano 105 gruppo. It's in fairly good condition, though the standard platform pedals denote that this race bike rarely sees speed anymore. 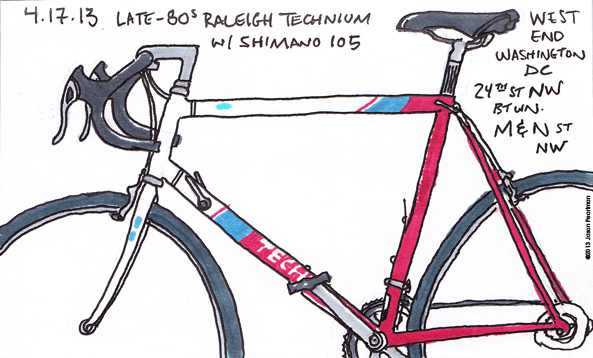 Posted by Jason Pearlman at 12:30 AM 1 comments

Worked together with Katherine Tucker on these drawings last week. Two is better than one they say. Check out her blog here: http://katherinetucker.tumblr.com/

The Washington National Cathedral is one of my favorite places to sketch. There is a lot of scaffolding on it right now as they repair the damage from the 2011 earthquake. If you look closely, you can see that the top of one of the spires is truncated, just above the flying buttress.
Posted by Joel at 7:36 PM 1 comments 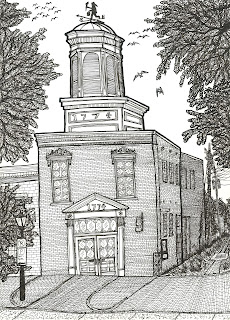 This Firehouse was built in 1855 and it was remodeled in 1871, later during 1992 was restored to the current look. This building was created for The Friendship Fire Company that was established in 1774, as the 1st volunteer fire company for the Old town in the city of Alexandria, VA, U.S.A. Today the building is a museum that stores the preserved equipment of that era like the old fire engine. I live very few blocks away from this beautiful building so it took me 3 days visiting it and sketching for about 1 hour each day to a total of 3.5 hrs. I used black ink on white paper.
Posted by Guido C. Seoanes Perla at 4:57 PM 0 comments 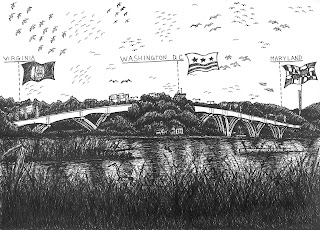 The bridge starts on the state of Virginia coming from the south west, at the middle passes the boundary on the south corner of Washington DC, and it lands at the state of Maryland on the south east. Under the bridge the Jones Point park is located which is full of beautiful wild life. The sun was starting to set and all these birds were flying around in a crazy fashion. Some of the birds were fishing others were doing some crazy acrobatics moves. There is a lot of aquatic activities going on from kayaking, fishing boats, to sailing boats. The weather was perfect and the sky was clear. This sketch took me 3 hours in a very relaxing environment and it was done with black ink on white paper.
Posted by Guido C. Seoanes Perla at 12:37 AM 0 comments 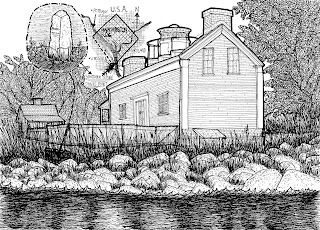 During the 40th Sketchcrawl I went to Jones Point to sketched the Light House and the Southern stone marking point of Washington DC. This stone was the first Federal Monument of the new created U.S.A. when it was put in place back in 1791. This stone marks the beginning of Washington DC and it is in the South most point of the City at the tip of Jones Point. This is a fantastic park located right under the Eisenhower bridge in Alexandria, VA. The park is full of vegetation as well it has Native America, Colonial, WWI, and today's history. I did this sketch right in the water sitting in a chair and it took me 3 hours and a little extra in between running for cover to the light house because of thunderstorms and as well for the visit of 2 beavers that were inspecting what I was doing close to their territory (that's when I got out of the water for good). 3.5 Hours and I used black ink on white paper.
Posted by Guido C. Seoanes Perla at 12:35 AM 0 comments